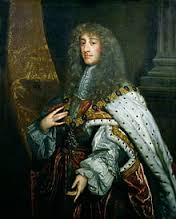 Gun money was an issue of coins made by the forces of James II during the Williamite War in Ireland between 1689 and 1691. They were minted in base metal (copper, brass or pewter), and were designed to be redeemed for silver coins following a victory by James II and consequently bore the date in months to allow a gradual replacement. As James lost the war, that replacement never took place, although the coins were allowed to circulate at much reduced values before the copper coinage was resumed. They were mostly withdrawn from circulation in the early 18th century.

The name “gun money” stems from the idea that they were minted from melted down guns. However, many other brass objects, such as church bells, were also used.

There were two issues. The first “large” issue consisted of sixpences, shillings and half crowns. The second, “small” issue consisted of shillings, half crowns and crowns (5 shillings). Some of the second issue were over-struck on large issue pieces, with shillings struck over sixpences, half crowns on shillings and crowns on half crowns. The most notable feature of the coins is the date, because the month of striking was also included. This was so that after the war (in the event of James’ victory), soldiers would be able to claim interest on their wages, which had been withheld from proper payment for so long.

This site uses Akismet to reduce spam. Learn how your comment data is processed.